Waist Deep in the Big Muddy. 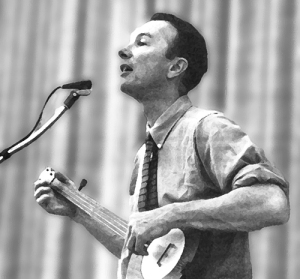 Remember that? It’s the refrain of a song Pete Seeger wrote in 1967 and sang a few months later on the Smothers Brothers show. CBS, the network on which the show was broadcast, objected to the song’s anti-Vietnam War message and censored it. Then in ’68, after a raft of bad publicity, they reversed course and let the song air.

I was around back then. I watched the Smothers Brothers every week on a little blue portable TV with a 12-inch black & white screen, the picture fuzzy and staticky if you didn’t set the rabbit ears just right, and even then, it was fuzzy pretty much all the time. Do you remember rabbit ears? No? Don’t worry about it. You can google them later if you want.

Anyway, I remember the big hullabaloo over CBS censoring the Smothers Brothers. That decision was just plain stupid. We all thought so. But then, there was a lot of stupid going around at the time. In some ways like, for example, now.

Those six words – Waist Deep in the Big Muddy – I haven’t thought of them in years, probably decades. And then – *poof* – they popped into my head just a minute ago. Right as I was starting to write about how I’ve been feeling lately.

Which is: lousy. Maybe you, too? As in, waist deep in bad news? I mean, doesn’t it basically feel like the shut-off valve on the bad news pipe is busted, and nothing can stop the rising tide of flooding muck?

I went to pick up a prescription at the pharmacy this afternoon. Simple errand. Practically around the corner, an easy drive. My mom came along. We were chatting and catching up. The pharmacist was pleasant, as she always is. But wait. Don’t get comfortable yet.

Because along with the sounds of small talk, footsteps, doors closing, papers rustling and the occasional cough, there was also a CNN reporter’s excited voice crackling from the wall-mounted flat-screen across from the counter. (And I just have to stop here to ask: whose bright idea was it to bring CNN into the pharmacy? Who thought CNN seemed like a better idea than, say, soothing music, or pictures of puppies? Are you trying to drive us to drugs?)

What? No! Not again. Not that sinking, helpless, horrible feeling again.

I turned and said to the pharmacist, “I don’t know how you can stand having that thing on all the time.”

And she said, “Well, at least this time, it doesn’t sound like anyone got killed.”

Right. True. I’m glad you’ve found a way to keep the horrible at bay, since you have to work here every day. Really. I am. I think it would give me a nervous breakdown. So I gotta go. Thanks for your help. Have a great day. Bye for now.

Because I’m going to check out for awhile. I need a break. From the news. It’s not that I don’t believe in the value of an informed citizenry. I surely do believe in that. And I try to be one, an informed citizen. It’s just that sometimes there’s way too much information to digest and still remain sane. Sometimes you can get so informed that you feel like you’re, well, waist deep in the big muddy. Not only that, you’re about to get sucked under. You’ve got to wade to shore and give your boots some time to dry.

Which is what we did. In a way. By which I mean, after we finished our other errand, Mom and I, on a total whim, stopped at a nail salon, and both of us got pedicures. 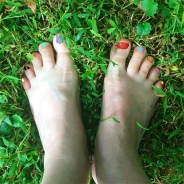 Okay, I live in the world. I see other women’s feet. For goodness sake, it’s been summer for the past several months. We’ve all been living in a world of toes. And if you’re looking at women’s toes, you’re also, almost a hundred percent of the time, seeing the shiny, tiny nails at their tips. Pink, red, orange, blue of every hue, purple, day-glo green and even black. Sometimes with little bitty polished pictures on the big ones.

Not to overshare, but my toes don’t look like that. They’re plain, short and dull. The toenails I was born with. Except larger.

Before today, I’d had exactly one pedicure in my life. Fifteen years ago. My mother had never had any. It’s not that we’re Amish. As a rule, we try to look pretty. I’ve colored my hair a few times a year since I turned 60. But I’ve never gotten the whole nail thing.

Till today. Here’s the scene. My mom is 91. You already know how old I am. We’re sitting side by side in brown leather massage chairs , capri pants rolled up to our knees, soaking our feet in unnaturally blue, warm and bubbly water. Giggling. Exclaiming. Each step of the pedicure a source of amazement for us. “Oh, look! What’s this? Oh, haha! Ahh! This feels so good!” The pedicure ladies are businesslike. We are not. We are also not feeling lousy anymore. We’re feeling shiny. We’re having fun. 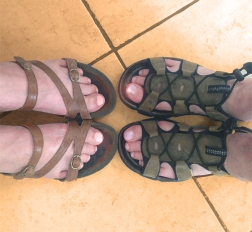 This is nice. Nice is a relief. Nice is… good.

When we finished and paid, and the head nail lady said, “See you again,” we replied, “Oh, yes! You will!” And we meant it. We liked it. A lot. We’ll be back.

And so. In that spirit, I’ve prepared a short presentation of niceness. No soothing music or pictures of puppies. Just some encouraging words for you to take to sleep tonight.

I’m switching off the news now. Grabbing a pillow. Sitting back. Putting up my feet. Wiggling those toes. Are you with me? Comfy? Okay then. Here we go. 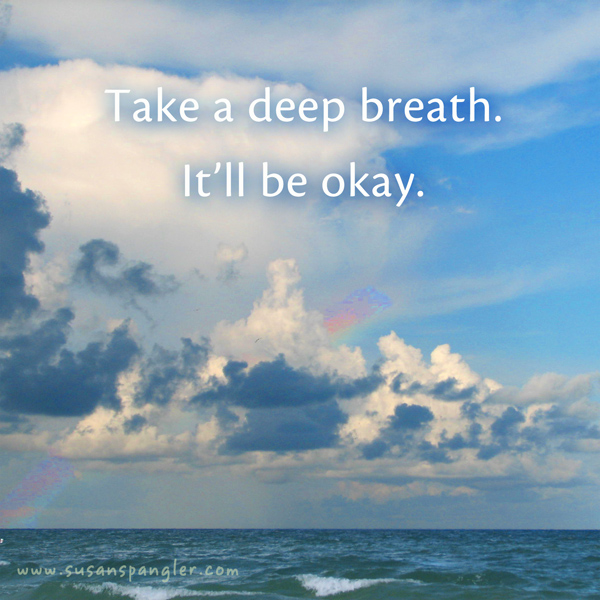 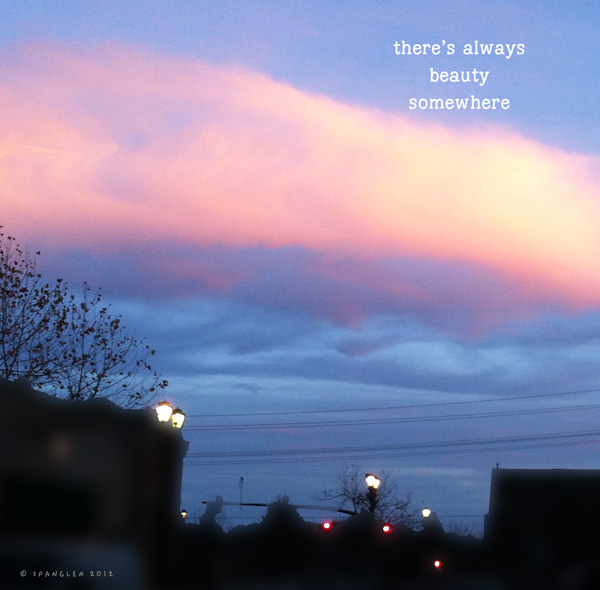 Let the light of the sun remind you of the light within you. 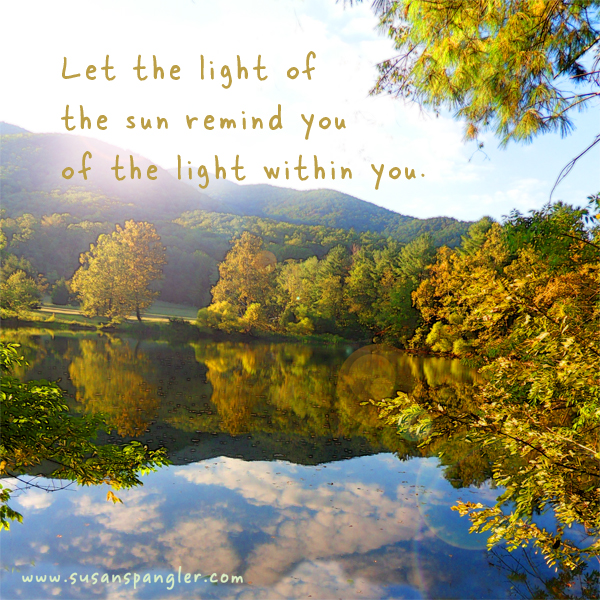 We see in the world what we hold in our hearts. 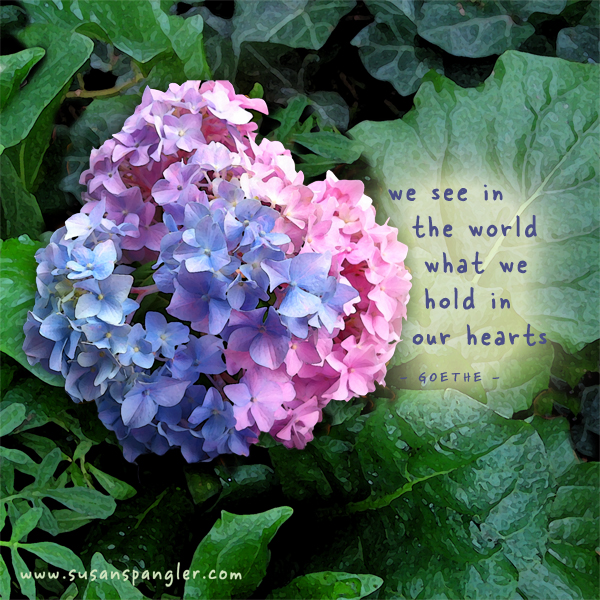 The quieter we become, the more we can hear. 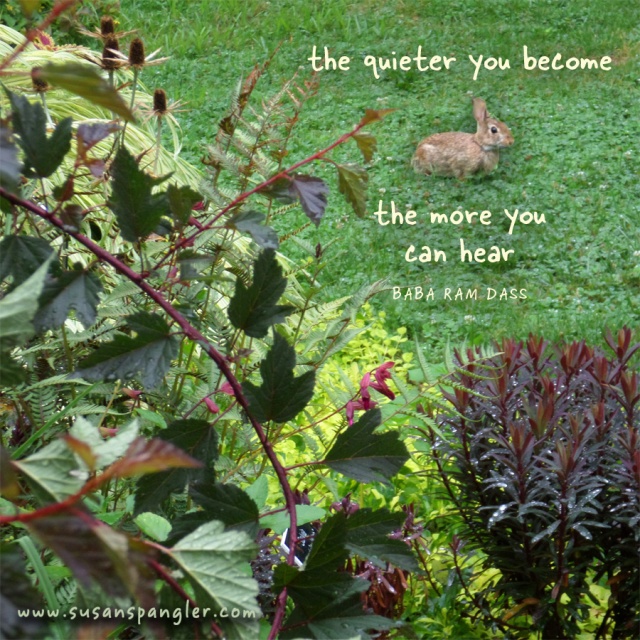 Wade barefoot through the leaves. 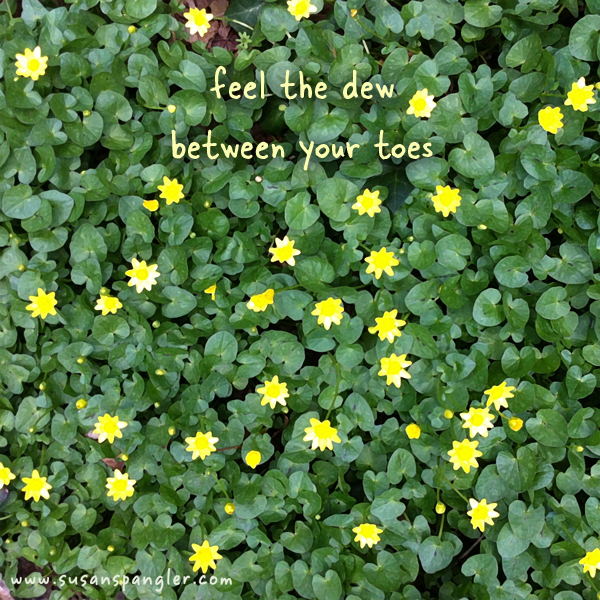 I'm a graphic designer and illustrator, observer and survivor. My website, www.susanspangler.com, contains a wide portfolio of my projects and images – some for pay, most for love, many for both. These graphic essays are inspired by things that catch my eye, my ear, my heart. Funny, confounding, astounding and encouraging, all at once. You know. Life.
View all posts by Susan Spangler →
This entry was posted in encouragement, family, inspiration, kindness, peace of mind, stress and tagged #encouragement, #family, #inspiration, #kindness, #peaceofmind, #shygirl. Bookmark the permalink.