Send in the Clouds

My mother taught me to love clouds. 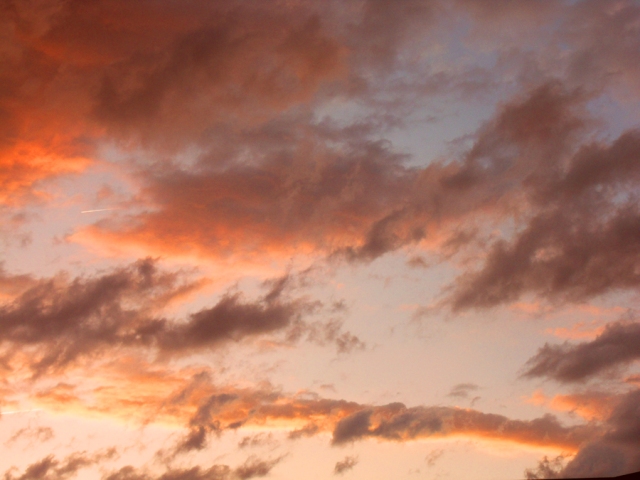 How many times did she marvel at the sky before I heard her words? No way to know. Because, like all kids, I could tell the difference between a remark and a command, and this utterance was clearly in the first category. She was just thinking out loud. Uh huh, Mommy, I hear you. Sort of. 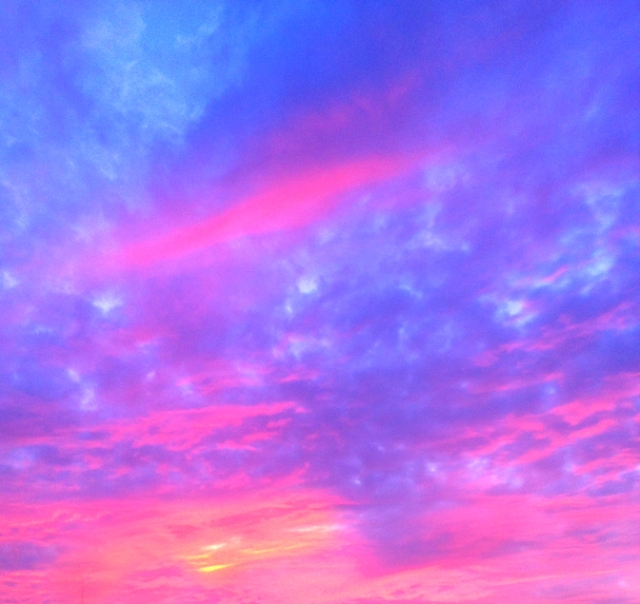 Funnily enough, though, I can remember the first time that I actually did look at a sunset in response to my mom’s observation. It must have been the wonder in her voice that got me to stop whatever I was doing and move my eyes to the sky, to all that golden orange-purple-pinkness rioting above horizon.

Too much to take in at once. You had to look there, and there, and over there, and up there, to see it all. I must have been ten or eleven then, more than a decade of earth years under my belt. Around 4,000 sunsets. Maybe more. But this was the first one that had ever stopped me in my tracks.

After all, at ten or eleven, sunsets were not among the meteorological conditions that engaged me. Light and darkness were both acknowledged with respect; they were the parameters that defined our activities. Summer was also a phenomenon whose existence was significant. Likewise, snow.

But as of that long-ago evening, sunsets were also on my radar. Not at the same level as best friends or books or dessert. But once in awhile, when chance turned my attention skyward at twilight, I’d recall the intensity in my mom’s voice, and my gaze would remain there. 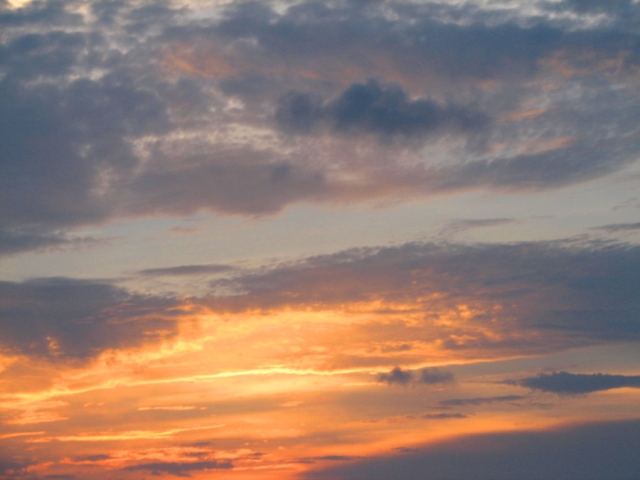 Sometimes, experimentally, I’d say, “Look at that beautiful sunset” out loud, the way my mom said it. I liked the feeling of the words in my mouth, their sound in my ears. And also, no denying it, beautiful was the word for what my eyes were seeing.

Gradually, scanning for sunsets and singing their praises became a habit, a comforting ritual of pleasure and contentment.

Unfortunately, it was also one of the triggers for my ex-husband’s rage. Wait. What? Where’d that come from?

I know what you mean. That’s exactly the way I felt the first time he sneered at me for admiring clouds out loud. Are you kidding me? Seriously? This is making you mad?

The answer was: Yes. He was: Mad. He called what I’d said “restating the obvious,” and he made it as clear as shouting at someone for a two or three hours can, that he did not like it, no, not at all. You think that’s weird? Bingo! You’re right! But it’s true.

Call me a slow learner, but it took me more than a few sunsets to stifle my obvious statements in his presence. To tell the truth, I was never completely successful.

Remember how it was when you left home for the first time? When you first lived on your own, sans parents? Sometimes kids go wild. Drinking, drugs, all manner of boundary-busting behavior. I was never one of the daring ones. My big thing was eating oreos for breakfast.

You can imagine how wild I went when I finally cut the ties with my ex. For one thing, I bought a bright red sweater. And that was wild, because? Because back in the day, a red garment of any kind would have bought me a round-trip ticket on the tirade train. Again, not kidding. I’m not even exaggerating. There were only three clothing colors of which that man approved: black, white and navy blue. All others were condemned. At length and top volume.

So. Clad in red, I finally threw his rules to the wind, unstifling my obvious observations at every opportunity. “This is so delicious!” “I just love that song!” “What a nice day!” It felt almost reckless, such uncensored self-expression. 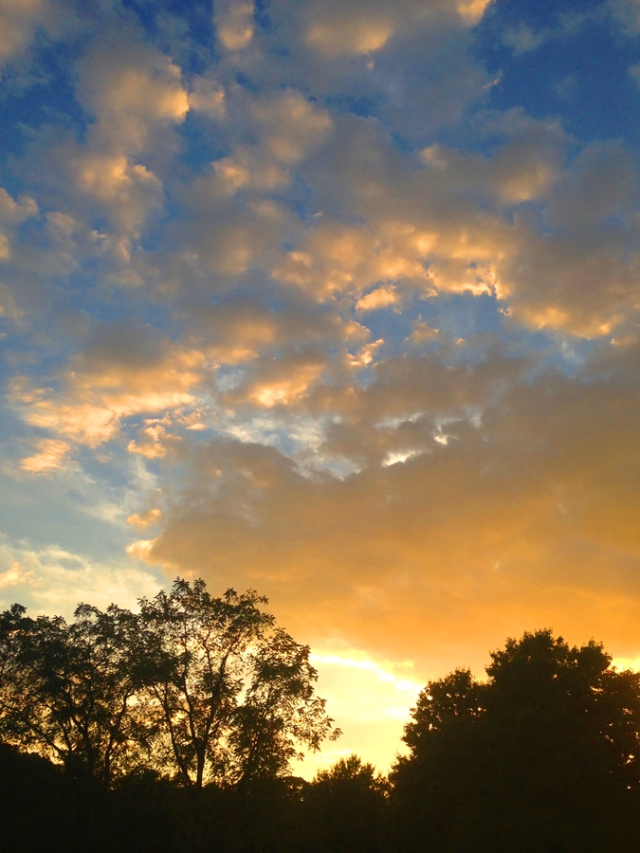 The first time I exclaimed, “Ohh! Look at that beautiful sunset!” while I was dating George, my now-husband of 20+ years, I held my breath. How would he respond? I won’t keep you in suspense. This is what he said: “Yeah. It’s really pretty.”

Welcome back to Normalville! Where a person can love clouds out loud. No offense to trees, beaches, mountains, rivers or fields blossoming with wildflowers. I love them, too. A lot. And when clouds are in the picture with them, I love them even more.

Solitary white smudges that seem to have lost their ways on otherwise blue and cloudless days.

I know I’m not alone here. In fact, there are at least 35, 948 others who share my atmospheric affinities. That’s the official membership in The Cloud Appreciation Society, an organization based in Britain that boasts members from 163 countries, a colorful website, a public manifesto, a page for “clouds that look like things”, and an online store with an awesome array of proudly cloudy bling. 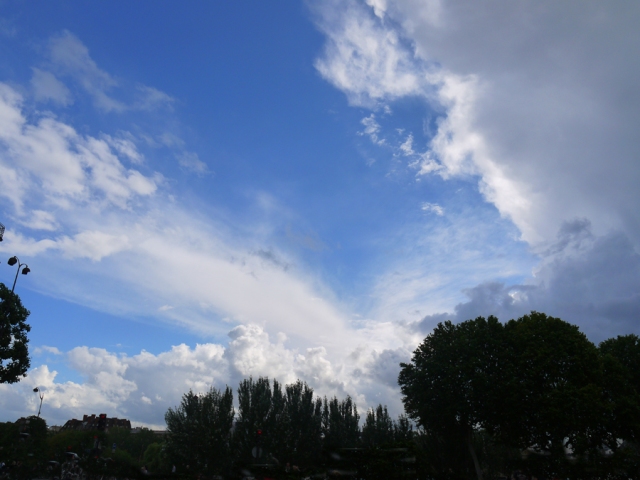 But getting back to the clouds themselves: What is it about these shapes in the sky that inspires so much gazing, painting, writing, and snapping of countless shots? What makes us sigh at shifting shafts of color and moisture and light?

Well, here’s one idea. Neurologists have performed brain scans that reveal that when people are experiencing something they perceive as beautiful – art or music, for instance – blood flows into their brains’ medial orbito-frontal cortex (a.k.a. their pleasure centers), and they actually light up. That’s pretty beautiful, right?

And actually, I think that’s what this whole question of clouds comes down to: What feels, well, beautiful. To you. 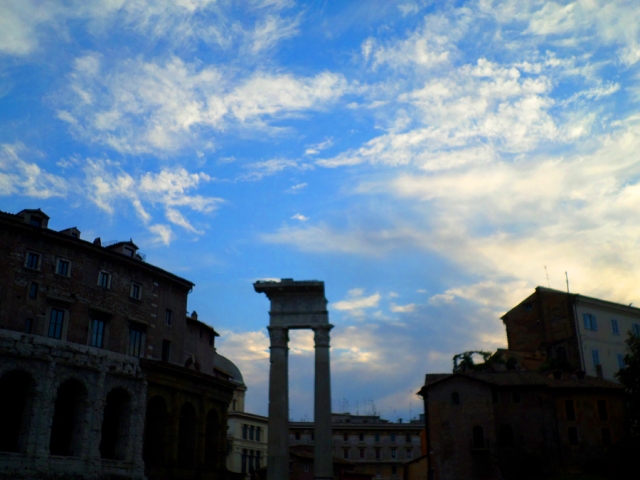 Which is a subject philosophers have been debating for millennia. As in, wondering whether beauty is a quality residing within objects, like mass, weight, temperature – or, on the contrary, if it simply exists in the eye of the beholder.

Skipping forward through the centuries into this one, we come to Crispin Sartwell, an American philosopher, and his book, Six Names of Beauty. In it, he ascribes beauty to a relationship between an object and an observer. Like a star twinking in the night sky – and you or me, wishing on it, from way down here on the ground.

Using the example of the sky, he also suggests that the very process of admiring something outside of ourselves can help “turn us outward” – cracking the shells of our little selves to encompass a wider view of the world. A beautiful way to put it, don’t you think?

In Only a Promise of Happiness, Alexander Nehamas, another American philosopher, takes that idea a little further. He suggests that when we perceive something to be beautiful, it’s making us an offer we can’t refuse: in exchange for the pleasure it affords us, beauty requires us to take time and give attention. And that’s not all. Nehamas also believes that it’s not enough for us just to feel something is beautiful; the experience of beauty is something we also feel compelled to share.

Which brings us back to Mom, who called me on the phone a few evenings ago. Just to say, “Go outside right now! Before the sun sets!” The entire horizon was massively magenta, glinting goldly, the October branches of our big oak arching starkly against the sky.

And wow. Just look at those clouds. 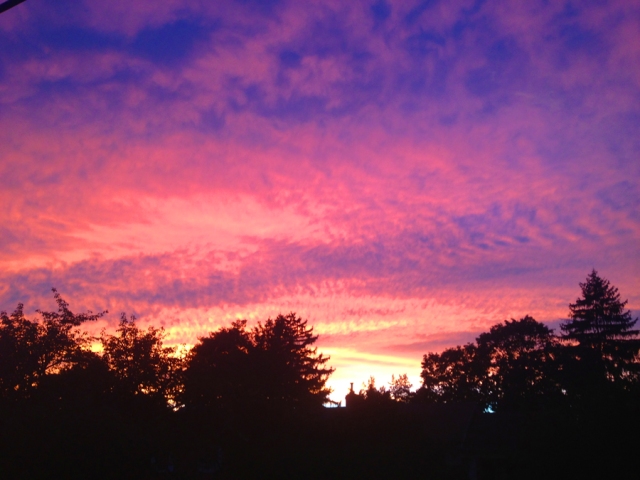 I'm a graphic designer and illustrator, observer and survivor. My website, www.susanspangler.com, contains a wide portfolio of my projects and images – some for pay, most for love, many for both. These graphic essays are inspired by things that catch my eye, my ear, my heart. Funny, confounding, astounding and encouraging, all at once. You know. Life.
View all posts by Susan Spangler →
This entry was posted in affirmation, beauty, family, home, inspiration, kindness, peace of mind and tagged #affirmation, #familylove, #gratitude, #innerpeace, #inspiration, #kindness, #peaceofmind, #shygirl. Bookmark the permalink.

2 Responses to Send in the Clouds